Yesterday Mamma returned from her week long trip to Aruba. The kids were so happy to see her!
She was awesome enough to bring the kids back some really cool sea shells, some lava rock, crab claws and a piece of coral.
Mr. K was so excited when I told him this morning that we would be doing a small unit study on coral reefs!
First we watched some of this documentary on Youtube:
https://www.youtube.com/watch?v=8ncUVddkK3Q&list=PL8UxdPqZt7EUSYh8pldrKMapABzXDAJ6m&index=20
I myself was unable to see all of it (having a 2.5 yr. old & three 2 yr. old daycare kiddos will do that!)  but he watched about 30 mins.  of it & he also paused the movie a couple times to talk with me about what he had learned. I love when he does this because I know he is paying attention!
After the video we read the info. on this page:
http://kids.nceas.ucsb.edu/biomes/coralreef.html
We also googled images for sea urchins. We noticed that sea urchins come in all shapes and sizes and noted that their spikes are all different lengths. We also discussed the fact that if  you step on a sea urchin they sting (there were some images of people having stepped on them)
We also google images for star fish because Mr. K wanted to draw one.
While I was reading K was drawing and colouring the picture below for his unit study book 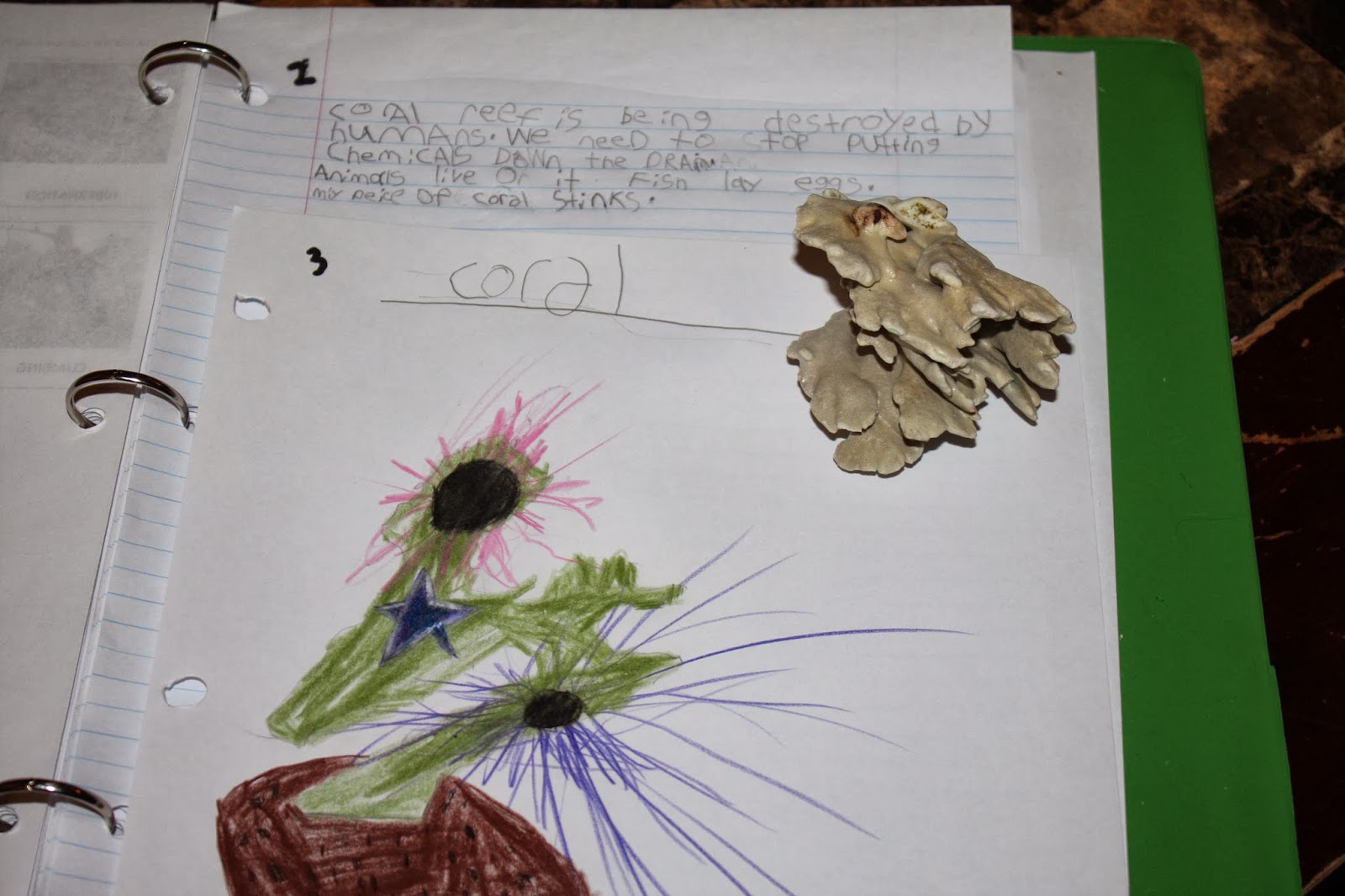 *Note the starfish and sea urchins on the coral.
The writing portion was done after while we were reflecting on things we could do as humans to help the coral reef (there is a written section about this in the article above)
Mr. K said that we need to stop pouring chemicals down the drain and he asked me about what I use to wash the floors (Lysol).  I also have biodegradable cleaner and vinegar that I use most of the time.
Mr. K  checked all the labels and informed me that the cleaner that is harmful to the environment should not be used anymore & I should only buy the vinegar & biodegradable cleaner. I told him we would now do that & we also discussed different ways we can conserve water. We already do that but it was nice to review it anyway.

If you can see Mr. K's last sentence it says "my piece of coral stinks".  He cannot get over the "fishy" smell of his coral ...LOL
It was a great unit study and a great day full of learning!
Posted by Unknown at 12:05 PM